How the post-pandemic phase may influence the global economies.

According to a study conducted by one of the main banks operating in Russia and the CIS countries, the average weekly turnover of small and medium-sized enterprises, over three non-working weeks, has fallen by 20-30%.
The most dramatic drop was 28%, recorded in the first week, from 30 March to 5 April. The second week saw a fall of 19% compared with the average turnover in February and March, with a 16% drop in the third week. This suggests that small and medium-sized enterprises “have been able to adapt quickly to the new conditions and recoup part of the losses suffered during the first week of self-isolation”, according to the study led by one of the main Eurasian banks.
The study also indicates that the main drop in turnover was recorded by travel agencies and companies (-78%), beauty salons (-66%) and the ‘entertainment, culture and sport’ sector (-64%).
On the other hand, the pandemic has generated a rise in goods transport (+9%), online education services (+4%), food retail (+6%) and online retail (+2%). These dynamics show that SMEs connected with the real economy have been managing to contain the damage and have opened up to new forms of business with the help of new technologies. Since 2008, Mikro Kapital has been supporting micro-businesses and small and medium-sized enterprises in Eastern Europe, Russia and countries along the Silk Road, seeking to invest in micro-finance institutions which provide micro-credit, micro-leasing and impact finance. We asked Vittorio Volpi, entrepreneur, economist, economic journalist and Silk Road expert, how the coronavirus has accelerated some entrepreneurial and digital processes and how the post-pandemic phase may influence the global economic stage.

Many countries are planning phase 2 and the reopening of businesses. What do you feel are the ingredients for a strong and rapid recovery?

I am sure that the recovery will vary from country to country. The results will depend a great deal on the quality and preparation of citizens. The various countries will ease the restrictions on movement, but severe rules will be introduced for companies in order to contain new coronavirus outbreaks. Even if many financial analysts envisage a rapid recovery, I believe that there will be a ‘U-shaped’ recovery for some economies and a period of stagnation.
I therefore envisage a two-speed recovery. On the one hand, countries such as Germany, which have closed fewer factories and implemented less drastic restrictions, will escape the crisis rapidly. Yet, other countries that have imposed a total lockdown will be forced to face a crisis that will drag on for some months or years. We must understand that this epidemic will continue to exist for a long time; we will have to learn to live with it, paying greater attention to our everyday lives. We will need to contain the virus and reach ‘R0’ status, i.e. the ‘basic reproduction number’, which measures the transmission potential of an infectious disease to prevent a potential second wave. In just the last few days, Singapore and South Korea have plunged back into crisis with a high number of infections; these second waves could destroy the economies of these countries.

What role will Russia, China and Asian countries along the Silk Road play on the global economic stage?

This pandemic has caused the re-emergence of nationalistic feelings and redrawn the boundaries (and not only geographic) of many countries. The restrictions implemented have been exceptional in peace time and have not only affected the personal freedom of citizens but have also acted as a ‘stress test’ for local governments. The effects are still modest, but they will be significant in the future.
This is shown by the ‘Siberia’ gas pipeline, through which Russia sells energy to China. The Chinese dependency on the Middle East will thus diminish and offer Russia, the only real Eurasian power, great opportunities to do business and recover from the crisis.
This will act as a stimulus for relaunching the ancient Silk Road. However, this time it will be more interconnected, boosting the growth of a series of countries in Central Asia, future emerging economies.
Do not forget that an economic and political shift is in progress towards Asia, where 2/3 of the world’s population will be enjoying the boom. This is a blessing for Russia.

According to global analysts, we have entered a new era, one that is not solely financial, where many of the current paradigms will be overturned and social behaviour will evolve. What will the world be like after coronavirus?

The real unknown here is the vaccine. This is a crucial element to enable the world to recover quickly and prevent relapses and potential new outbreaks.
Coronavirus has left a deep, indelible mark – we have been taught a lesson.
Globalisation, as we have known it over the last thirty years, will no longer exist. One need merely consider Japan, which has spent billions of dollars on encouraging Japanese companies, currently based in China, to return to Japanese soil.
Another fundamental aspect which will change the order of the international stage will be the role of China, which will no longer be the ‘world’s factory’.
USA/China relations have deteriorated markedly as a result of the coronavirus and, as a possible side effect, economic cooperation between the two powers will be greatly reduced.
In essence, the coronavirus has had a major impact on the acceleration of a dichotomising process which was already latent. There is a clear separation between two opposing parties. I therefore see two 5G systems, one American and one Chinese – two poles which will recruit a number of countries that choose to side with one or the other.

The coronavirus has accelerated the transition to a digital economy but is also shedding light on the digital gap between countries and society. How can digitisation also be transformed into a growth opportunity for SMEs?

The technological process will radically transform economies. One need only observe the use of technology in searching for and treating people suspected of being infected. In the aftermath of the September 11 attacks, we gave up our privacy for greater security; after COVID-19, we will reach the same compromise, where the erosion of privacy will become a part of daily life, healthcare, protection and security. The walls of privacy will be torn down, and citizens will no longer be allowed to have secrets.
Smart working will not be a temporary episode, simply needed to adapt to the coronavirus; it will transform our way of working and our working lives, including in sectors where digitisation had been unthinkable until just a few days ago.
As always, it will be a case of thesis, antithesis and compromises. It is negative phenomena that cause change.
A simple thing such as a virus has triggered enormous change – a new, virus-proof digital revolution. It will also be a world of opportunities. Whoever learns to predict changes and leaps onto the train of change will swiftly rise to the top!

Investors are faced by fast-moving and evolving times. Which sectors, emerging countries and business models will we need to keep an eye on?

With regard to investments, it goes without saying that healthcare and health products and technology will enjoy the lion’s share. Social distancing will encourage the birth of new business models based on proximity and respecting personal space. Places of concentration will be avoided. With regard to emerging countries, it will depend on the geographical areas and how, over the coming months, these geographical regions will confront the recovery phase. The first results will come from strong countries.
The micro-credit sector in support of SMEs will be important. This is an asset class with great potential and one fundamental element, of great interest for alleviating this period of turbulence: it is not connected to the markets.
Time has shown that it is like rigid (inelastic) demand – there will always be a need for it.

Who is Vittorio Volpi

He began his professional career with the First National City Bank in Milan, working both in the United States and Europe. In 1971 he opened the offices of the first Italian bank in Japan (Comit) which he managed up to 1981 with responsibility for the whole Far East. In that same year he set up a company offering strategic and financial consultancy, Parallels KK, Tokyo. This was followed by his appointment to the Chairmanship of UBS Japan (1991), a position he retained until 2001.</span<

On his return to Europe he took over the position of General Manager of UBS in Zurich with involvement in project Italy, helping to bring the Swiss presence in Italy up to standards of excellence especially in Private Banking. He left his position in UBS in 2008, concentrating on reviving the Parallels consultancy but this time in Switzerland to develop strategic consultancy projects. 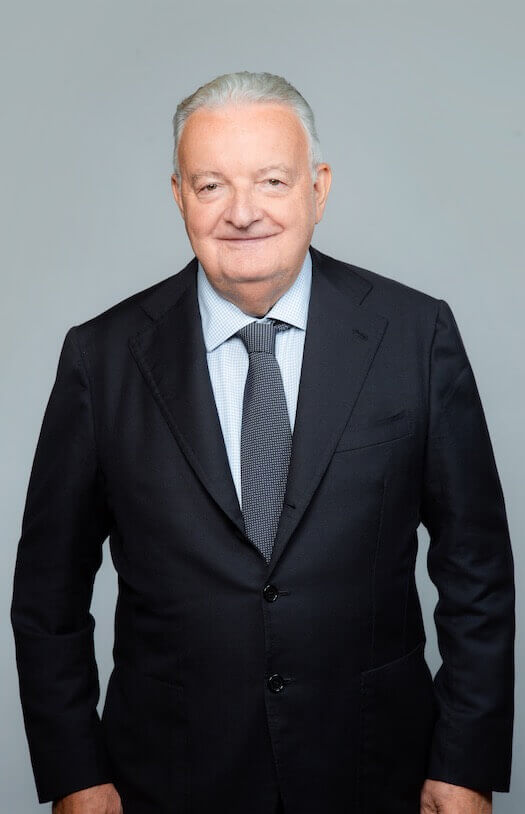